Four players dungeon crawling at once? Mark Vanstone shows you how to recreate Gauntlet’s co-op mode in Python and Pygame Zero. 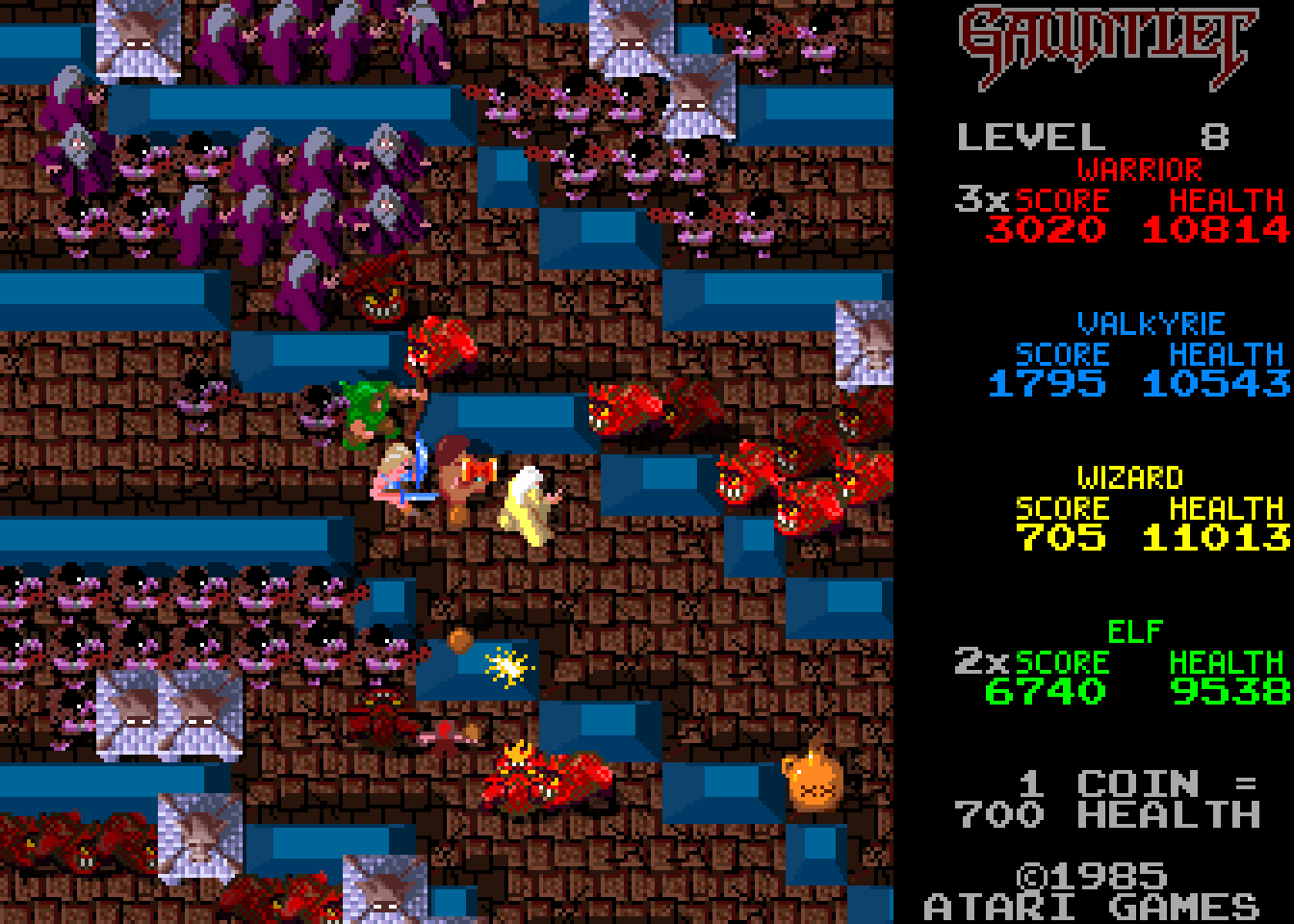 Players collected items while battling their way through dungeons. Shooting food was a definite faux pas.

Atari’s Gauntlet was an eye-catching game, not least because it allowed four people to explore its dungeons together. Each player could choose one of four characters, each with its own abilities – there was a warrior, a Valkyrie, a wizard, and an elf – and surviving each dungeon required slaughtering enemies and the constant gathering of food, potions, and keys that unlocked doors and exits.

Designed by Ed Logg, and loosely based on the tabletop RPG Dungeons & Dragons, as well as John Palevich’s 1983 dungeon crawler, Dandy, Gauntlet was a big success. It was ported to most of the popular home systems at the time, and Atari released a sequel arcade machine, Gauntlet II, in 1986.

Atari’s original arcade machine featured four joysticks, but our example will mix keyboard controls and gamepad inputs. Before we deal with the movement, we’ll need some characters and dungeon graphics. For this example, we can make our dungeon from a large bitmap image and use a collision map to prevent our characters from clipping through walls. We’ll also need graphics for the characters moving in eight different directions. Each direction has three frames of walking animation, which makes a total of 24 frames per character. We can use a Pygame Zero Actor object for each character and add a few extra properties to keep track of direction and the current animation frame. If we put the character Actors in a list, we can loop through the list to check for collisions, move the player, or draw them to the screen.

We now test input devices for movement controls using the built-in Pygame keyboard object to test if keys are pressed. For example, keyboard.left will return True if the left arrow key is being held down. We can use the arrow keys for one player and the WASD keys for the other keyboard player. If we register x and y movements separately, then if two keys are pressed – for example, up and left – we can read that as a diagonal movement. In this way, we can get all eight directions of movement from just four keys.

For joystick or gamepad movement, we need to import the joystick module from Pygame. This provides us with methods to count the number of joystick or gamepad devices that are attached to the computer, and then initialise them for input. When we check for input from these devices, we just need to get the x-axis value and the y- axis value and then make it into an integer. Joysticks and gamepads should return a number between -1 and 1 on each axis, so if we round that number, we will get the movement value we need.

We can work out the direction (and the image we need to use) of the character with a small lookup table of x and y values and translate that to a frame number cycling through those three frames of animation as the character walks. Then all we need to do before we move the character is check they aren’t going to collide with a wall or another character. And that’s it – we now have a four-player control system. As for adding enemy spawners, loot, and keys – well, that’s a subject for another time. 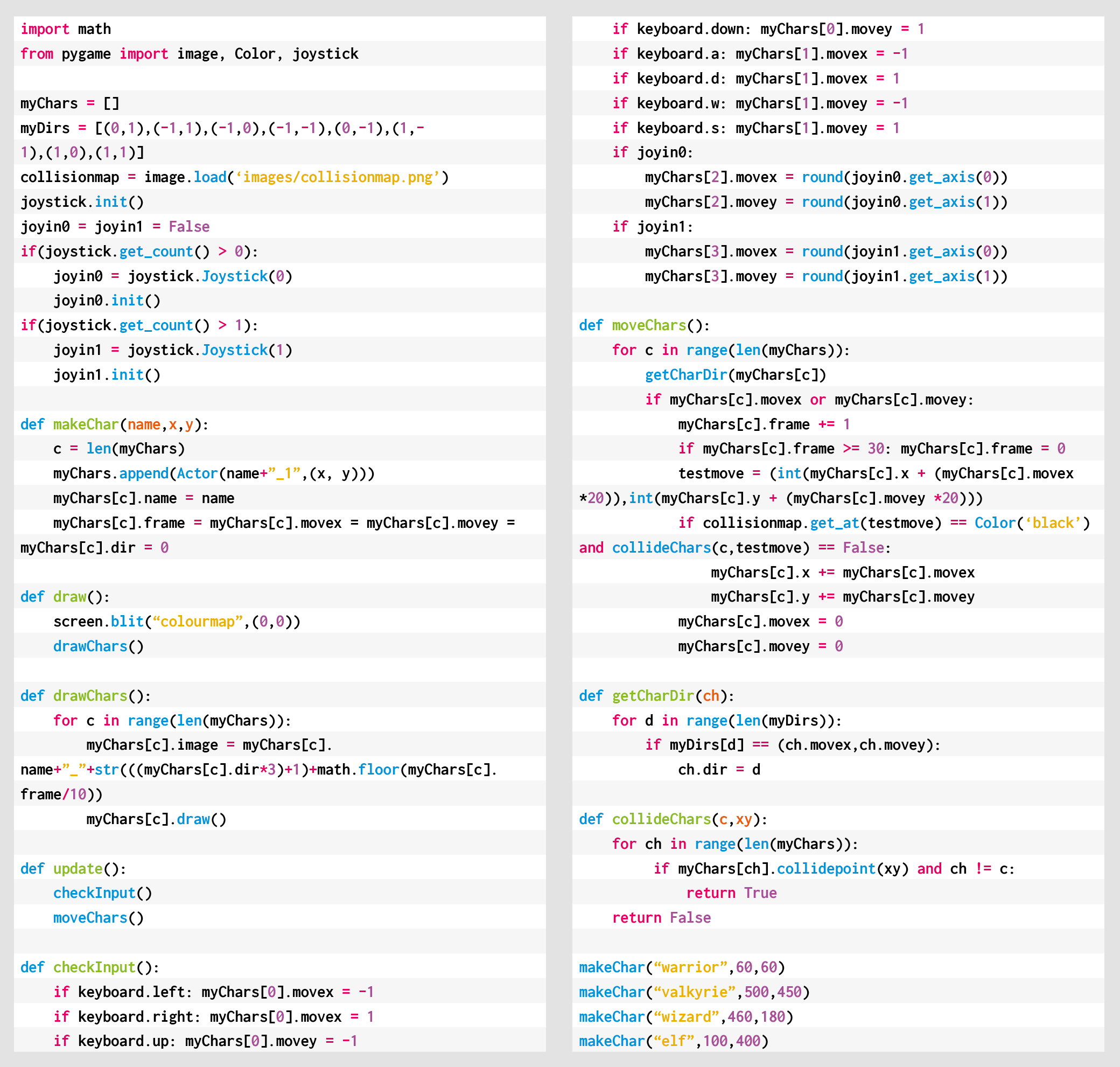 Here’s Mark’s code snippet. To get it working on your system, you’ll need to install Pygame Zero. And to download the full code and assets, go here.

Get your copy of Wireframe issue 39

You can read more features like this one in Wireframe issue 39, available directly from Raspberry Pi Press — we deliver worldwide.

And if you’d like a handy digital version of the magazine, you can also download issue 39 for free in PDF format. 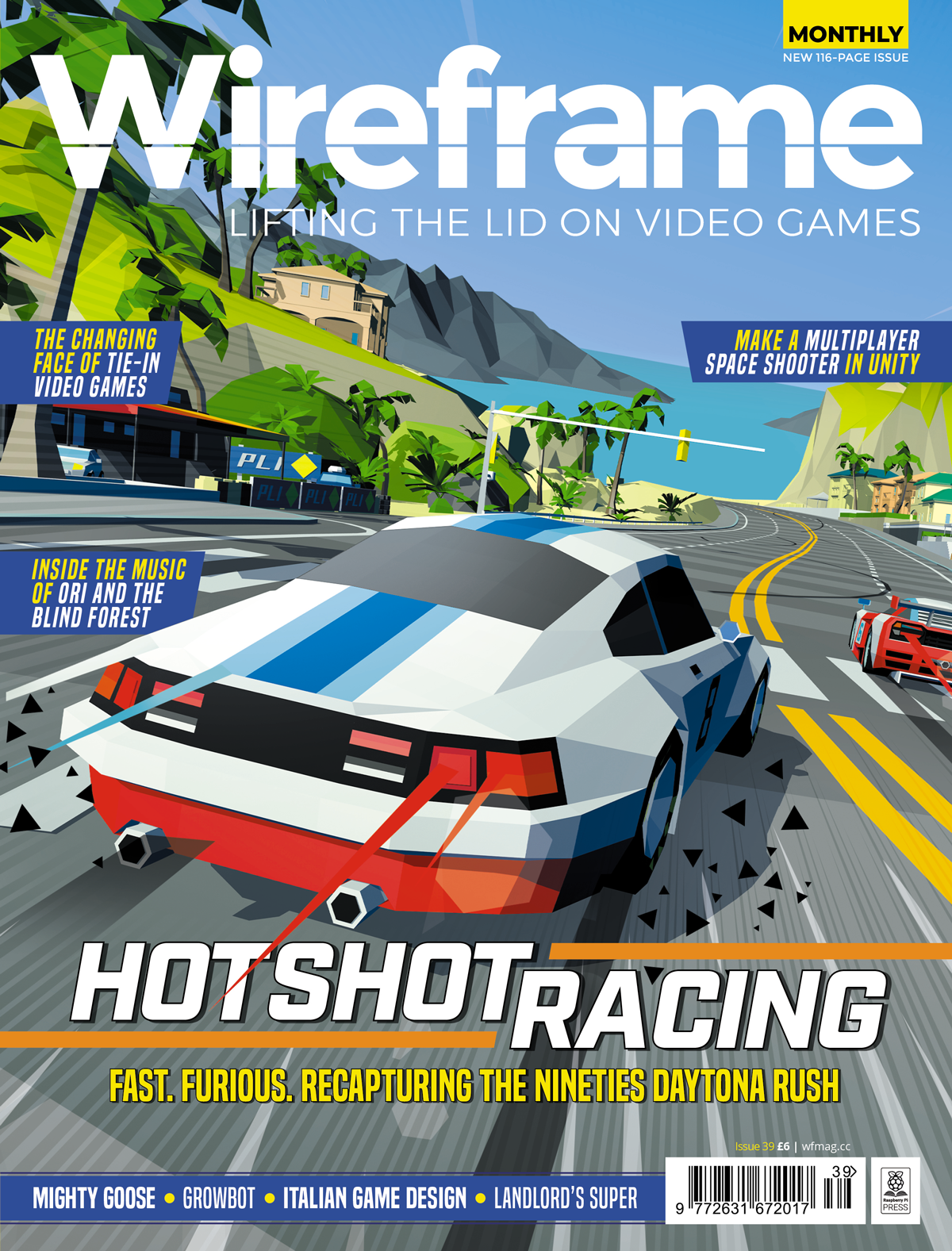