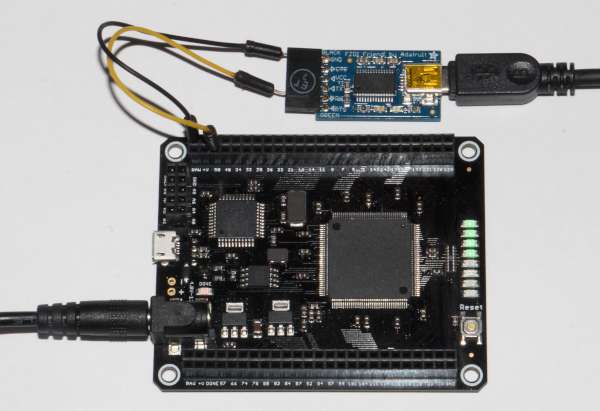 I recently started FPGA programming and figured it would be fun to use an FPGA to implement the FizzBuzz algorithm. An FPGA (Field-Programmable Gate Array) is an interesting chip that you can program to implement arbitrary digital logic. This lets you build a complex digital circuit without wiring up individual gates and flip flops. It’s like having a custom chip that can be anything from a logic analyzer to a microprocessor to a video generator.
The “FizzBuzz test” is to write a program that prints the numbers from 1 to 100, except multiples of 3 are replaced with the word “Fizz”, multiples of 5 with “Buzz” and multiples of both with “FizzBuzz”. Since FizzBuzz can be implemented in a few lines of code, it is used as a programming interview question to weed out people who can’t program at all.